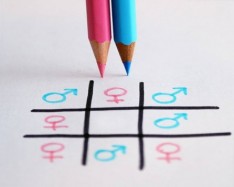 Sex change surgery is only a cosmetic procedure to make it look like a change was made, when in fact no female “parts” are used.

Did you know? No amount of surgery, hormone injection or anything else can, or will, change the birth gender DNA. It is absolute.

The only thing the surgeon can change is the medical record, birth records and the perception that a change took place on the operating table. A DNA test would prove no sex change took place.

Sex change regret may come years later when you understand the surgery did not make you a female or change your DNA gender/sex.

In my view, the transgender activists are so busy lobbying for new laws of protection that they ignore the 31% suicide rate.

Sex change regret, sadly, can and has resulted in suicide. We only need to remember Mike Penner, aka Christine Daniels, staff writer for the Los Angeles Times, who committed suicide in late 2009.

In a U.S.A. Today article dated 2/26/09 Steve Friess says: “(Mike) Penner's story, heralded in its early days as a triumphant example of transgender progress, has instead become a cautionary tale of the lesser-known phenomenon: transgender regret.”

The warning signs of suicide are often difficult to see, and for transsexuals, the high rate of suicide has been underreported. An article in Metabolism says that the suicide rate among transsexuals was five times greater than was expected when compared to a similar group.

The number of deaths and morbidity cases in 425 transsexual patients treated with cross-gender hormones were evaluated retrospectively and compared with the expected number in a similar reference group of the population. The number of deaths in male-to-female transsexuals was five times the number expected, due to increased numbers of suicide and death of unknown cause. (see the reference below)

Mike Penner, a very talented staff writer for the Los Angeles Times for 25 years, announced he was a female transsexual and began living as Christine Daniels in April, 2007. Except that the transition to female didn't last. In mid-October 2008, after a lengthy leave of absence, Penner, then 51, returned to the Los Angeles Times sports pages and the Times newsroom as a man. In a shadow of regret, he committed suicide only 13 months later.

About Dr. Money and "Treatment"

Currently the acceptable treatment for gender disorders is to assist the patient to change gender. The doctor who originated the radical irreversible treatment in the 1960s, John Money, became best known for his fraudulent research, pedophilia activism and a long-held belief that gender was a learned behavior and not innate at birth.

Dr. John Money became highly controversial among his medical colleagues when he was one of the first in the U.S.A. to advocate for surgically changing men into women at the Johns Hopkins Gender Clinic in 1966. Ten years later, a follow-up study published by Dr. Jon Meyer, chairman of the Gender Clinic, evaluated 50 transsexuals who had been patients at the Gender Clinic. The findings were a warning sign about the treatment. The report concluded that no improvement was noted in the patients’ psychological functioning as a result of Money’s gender change treatment. The clinic at Hopkins was then closed.

It should be noted, no conclusive “objective” research at any time in the last 40 years has demonstrated changing genders is an effective treatment for all gender disorders and suicide among this population remains a problem.

The accepted standards of care for most ailments are scrutinized and tested. Extensive studies are published in the medical literature over a long period of time to objectively evaluate the effectiveness of the treatment. But in the case of gender change, the standards of care were developed, adopted and promoted quickly, pushed by people like John Money, Dr. Paul Walker and Dr. Stanley Biber.

John Money’s follow-up study in the 1960s was shown to be questionable, fraudulent and/or misleading. In the forty years since, the effectiveness of changing gender as a treatment for gender issues has not been thoroughly questioned by the medical community through scientific study. No clear coherent knowledge or understanding of how changing genders can be an “effective treatment” in helping the good people with GID exists.

The acceptable standard for treating gender issues was developed and used quickly by one single man without the benefit and credible broad support of his medical colleagues at Johns Hopkins; in fact, it was quite the opposite.

The accepted standard treatment of GID is controversial, its effectiveness is unsubstantiated, and it has no basis in science. Is it any wonder the controversy continues and suicide remains a dark shadow of proof that no real progress in the treatment of GID has been made?

My heart goes out the entire Penner family and his colleagues at the Los Angeles Times.

--Walt Heyer, Male to female transsexual, returned successfully to my male gender now for over 15 years